Posted on March 8, 2016 by journalofcontemporaryasia 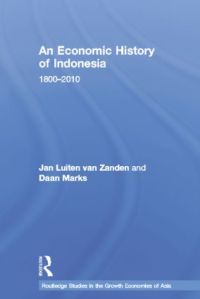 This book is authored by Jan Luiten van Zanden and Daan Marks and published by Routledge. This edition is dated 2014, being the paperback of a study originally published in 2012.

Gordon notes that the “authors emphasise the themes of institutions and economic growth and offer inquiry partly on the basis of new archival statistical material.”

The book covers a wide time period but Gordon observes that the authors “use the immense strengths of and leave themselves exposed to the huge weaknesses of neo-classical economics.” The reviewer would like an account more influenced by Marxist approaches and arguments with that approach.

This entry was posted in Uncategorized and tagged Alec Gordon, Indonesia, neo-classical economics. Bookmark the permalink.