Posted on July 20, 2016 by journalofcontemporaryasia 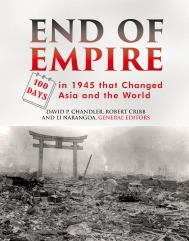 Brought together by David Chandler, Robert Cribb and Li Narangoa, the volume “records the … events over a 100-day period in 1945 from August 5 to November 12.” That period is bookended by August 5 when an atomic bomb was loaded to the B-29 Enola Gay, to be dropped on Hiroshima the next day. The 100th day – November 12 – is “an entry that describes the appointment of Sudirman who immediately launched an assault on Anglo-Dutch forces in Ambarawa in Java, which marked a turning point in adopting a more forceful resistance by Indonesian Republican military forces that hitherto had been more cautious.”

The book is linked to a website that “showcases, in a snapshot, the premise and gist of the entire volume as well as ongoing and future plans for expanding this project with other volumes.”

The reviewer believes End of Empire has “attractive features and commendable qualities.” As well as numerous evocative illustrations, historical documents and eye witness accounts, the well-written summation of “events, episodes and happenings … is undoubtedly … particularly appealing to a general audience who could easily digest the contents and in turn grasp their historical significance.”

While Ooi laments the limited treatment of the South Asian sub-continent, he concludes that End of Empire is “indeed ‘[o]ne hundred days of dreams, drama and turmoil,’
and should have a place on every interested reader’s shelf.”

This entry was posted in Uncategorized and tagged empire, Ooi Keat Gin. Bookmark the permalink.