Posted on July 2, 2018 by journalofcontemporaryasia 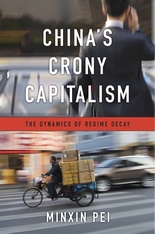 Kosmas Tsokhas has reviewed a series of books for JCA, all of which have been thought-provoking and have been widely read. His latest review is of China’s Crony Capitalism: The Dynamics of Regime Decay. The book is authored by Minxin Pei and published by Harvard University Press.

Tsokhas notes that President Xi Jinping’s leadership has revealed  a remarkable level of bureaucratic and corporate corruption in China. Pei argues that in the highest levels of the  party and state a “predatory, pervasive, and entrenched” mode of “crony capitalism” has developed. He examines this via a “scrupulous … use of data from 260 cases of systematic graft and fraud since the 1990s, by collusive networks, across public institutions and economic sectors.

Acknowledging Pei’s “skillful analysis of the wantonness of ‘crony capitalism” has produced a legacy of ‘great inequality of wealth,’ the rise of ‘privileged tycoons’ and the concentration of ‘illicit wealth’.” Yet the reviewer is critical that “his approach has sidelined how corruption in the privatisation process has gone along with a fundamental change of socialist relations of production into capitalist relations of production.”

Praising Pei’s scholarly objectivity the reviewer also considers that “sooner or later, in order for the party-state to act on behalf of capital-in-general, its personnel needed to disregard or downgrade the narrow ambitions of individual capitalists, so that the party-state could mediate between its strategic directions and economic priorities and the alliances and rivalries between corporate interests.” Tsokhas adds that “the sort of liberal-democratic political reform or regime change, that Pei has advocated and prophesised, have not proven to be pre-conditions before the leadership in Beijing has redoubled its efforts against corruption, not only because it has threatened to expose the counterfeit aspect of the post-Maoist project, but also because it has proven to be an expensive and parasitic drain on productive investment.”