Myanmar and the Rohingya Crisis

Posted on December 28, 2018 by journalofcontemporaryasia 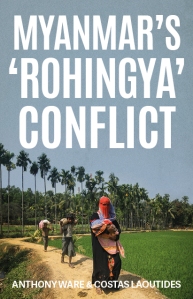 Myanmar’s “Rohingya” Conflict is a new book authored by Anthony Ware and Costas Laoutides for the publisher, Hurst. It is reviewed for JCA by Ashley South.

South states that this is a “balanced, concise and theoretically coherent volume [that] will presumably become a standard work on the greatest challenge to Myanmar’s incomplete and problematic political transition, following half a century of military rule.”

He says that the book takes an appropriate historical perspective and considers the “opposing and deeply contested narratives reproduced and promoted by different stakeholders.” He observes, however, that “in covering the historical roots of this complex conflict, the authors could have paused to consider those lengthy periods when Muslim and non-Muslim communities were not in conflict. What was going right in those times, which might be reproduced again?”

In recounting the tragic events of the recent crisis, South states that Ware and Laoutides are right to remind readers “that the state, including the semi-civilian government led by Aung San Suu Kyi, which has limited control over the Army…”.

South concludes with an important observation:

In this reviewer’s experience, prejudice against the Rohingya – and indeed against Muslim communities more broadly – is extremely widespread in Myanmar. Even the previously vaunted democracy leader Aung San Suu Kyi has been unwilling to speak out on their behalf. Nevertheless, a few brave and principled people, including some among the Burman majority, are willing to push back against exclusionary and racist narratives and actions. The chance of a future Myanmar as a liberal and rights-respecting state depends much on such people. The present book can be a useful resource for those working for an inclusive and progressive Myanmar.