Posted on March 31, 2019 by journalofcontemporaryasia 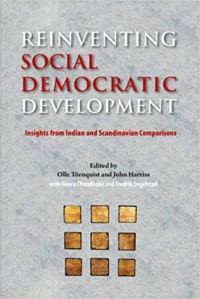 In a new book review for JCA, Neil Webster of the Danish Institute for International Studies in Copenhagen has examined Reinventing Social Democratic Development: Insights from Indian and Scandinavian Comparisons.

Edited by Olle Törnquist and John Harriss, with Neera Chandhoke and Fredrik Engelstad, the book is published by NIAS Press.

Social democracy has not had a great 40 years. For this book, its “defence takes its starting point in the success Sweden and Norway have had in achieving and maintaining greater equality than in most other countries, based not least in their welfare state models.”

Webster then asks an obvious question: “Why bring India into the discussion?” His answer from the collection is:

While the contexts in India and Scandinavia are quite different, India has national experience with social democratic policies starting with Nehru after independence and West Bengal and Kerala provide important local case studies. Comparison of these experiences and their contexts permits a more systematic review of the political and economic processes giving rise to these policies and the effects of their implementation.

The current political and economic climate is “ripe for a revision of the social democratic agenda in which a stronger global dimension is introduced while maintaining a focus on local manifestations of social democracy in practice.” Webster observes that Törnquist and Harriss “conclude with an element of optimism in the case of India.” Not so much for Norway and Sweden.

The collection is strongly analytical and richly detailed that “contributes to a discussion that hopefully will grow and take root…”.