China, Contention and Politics in the Digital Age

Posted on March 26, 2021 by journalofcontemporaryasia 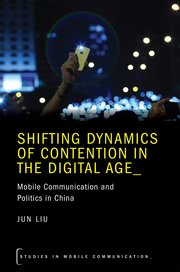 Shifting Dynamics of Contention in the Digital Age: Mobile Communication and Politics in China is a new book by Jun Liu, published by Oxford University Press in 2020. It is reviewed for JCA by editorial board member Jun Zhang of the Department of Asian & International Studies, City University of Hong Kong.

With the mass media state-controlled, “ordinary citizens have embraced mobile phones and the internet as alternative channels to search for and distribute information.” Jun Liu provides cases from the early 21st century showing how ICTs were used for mobilisation.

But the state has again sought to limit their access and de-legitimise information circulating outside state media. As the reviewer observes, things have changed since Liu was in the field: “the government was noticeably more tolerant of various voices and actions in the 1990s and 2000s than in the mid-2010s and since.” The reviewer argues that the regime”has also developed sophisticated ways of using ICTs to control information on the internet and on mobile phones.”