Love and the Death of King Ananda

Posted on June 6, 2022 by journalofcontemporaryasia 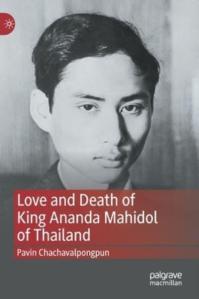 Love and Death of King Ananda Mahidol of Thailand is a new book by By Pavin Chachavalpongpun and published by Palgrave MacMillan. It is reviewed for JCA by Mark S. Cogan of the College of Foreign Studies, Kansai Gaidai University in Osaka, Japan.

One of the secrets kept by Thailand’s royals is the death of King Ananda, who was shot in the head in 1946. Pavin’s book seeks to shed some light on this royal death by examining the life of the young king, particularly the years spent in Switzerland. Cogan says that Pavin “has opened a window into Ananda’s private life.” In particular, the book shines a light on Ananda’s “hitherto unexplored and somewhat forgotten love, Marileine Ferrari, the daughter of a pastor in affluent Lake Neuchatel, Switzerland which neighbours Lausanne, where Ananda grew up and went to university.”

In one chapter, Pavin considers “King Ananda’s death and its decades-long cover up…”. Cogan argues that “Pavin’s account departs immediately from the official and Palace view that it was an accidental death, although nine years later in 1955, scapegoats, in the form of two pages and a royal secretary were arrested, tried, and sentenced to death in an alleged conspiracy to kill the young king .” He “explores alternative death theories.”

The book is no doubt controversial, if not for its subject matter, but for the fact that it was written by Pavin, a critic of the monarchy. It is also provocative, insofar as it invites additional attention on the “colourful” life of the reigning Thai monarch, King Vajiralongkorn (Rama X) and the anti-monarchy protests of recent years. In this new era of shattered taboos, nothing is off limits, and Pavin’s exploration of the life and death of a young monarch opens the door for more.